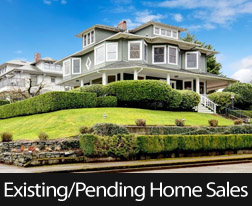 The National Association of REALTORS reported Monday that pending home sales dropped by -0.60 percent in October after falling at a revised rate of -4.60 percent in September. According to Lawrence Yun, chief economist for NAR, 17 percent of real estate agents reported delays in loan closings due to the government shutdown in early October.

Lenders were unable to verify borrower income through the IRS, which was closed during the shutdown. October was the fifth consecutive month with fewer pending home sales reported.

Homeowners who owe more on their mortgages than their homes are waiting to sell, and recent spikes in mortgage rates were cited as factors contributing to fewer pending sales.

Pending home sales are defined as homes for which signed purchase offers have been received and are considered an indicator of future home sales. The NAR notes that most pending sales close within 30 to 60 days of an offer being signed.

Would-be homebuyers may be including their dream homes on their wish lists for the holidays as many areas continue to experience a short supply of homes against high demand. In desirable areas this can lead to bidding wars and homes being sold before they are listed for sale.

Cash buyers are benefitting from these situations, while first-time and moderate income buyers may be sidelined due to affordability issues and the inability to compete with cash buyers.

Mortgage rates fell last week and the previous week. While a recovering housing market has been causing home prices to rise, economists described current readings for pending sales as a “pause” in the housing market recovery and said that a significant decline in home sales could adversely impact overall economic recovery.

Pending sales for the Northeast and Midwestern regions increased slightly and declined in the South and West. This suggested to some economists and analysts that the formerly hot housing market is cooling off along with the weather. Some decline in home sales is expected during fall and winter months.

This site uses Akismet to reduce spam. Learn how your comment data is processed.