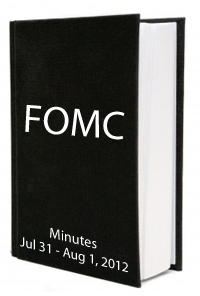 Eariler this week, the Federal Reserve released the minutes from its 2-day meeting which ended August 1, 2012. Since the release, mortgage rates have dropped.

The Fed Minutes are released on a schedule, three weeks after the FOMC adjourns from one of its 8 scheduled meetings of the year.

The Fed Minutes are meeting minutes; like you’d see after a corporation shareholder meeting, or after a condo board meeting. Specifically, the Fed Minutes details the conversations among Federal Reserve members which shape our nation’s economic policy.

At its last meeting, the Federal Reserve’s debate focused on the rate of economic growth and whether it was occurring too slowly to be long-lasting. The Fed appears to think so. Without a “substantial and sustainable strengthening” in the pace of economic expansion, it said, additional monetary stimulus would be “warranted fairly soon”.

Other notes from within the Fed Minutes included :

However, the Fed expressed an “unusually high level of uncertainty” about its assessments owing to the ongoing European sovereign debt problems. “Spillovers” remain possible and default threats continue to weigh on markets.

The Federal Reserve’s next scheduled meeting is September 12-13, 2012.

Since the minutes were released — and for the first time this month — mortgage rates in Arizona made a big move lower. This is in contrast to the rest of August through which mortgage rates have climbed steadily.

According to Freddie Mac, on August 1, the average 30-year fixed rate mortgage rate was 3.49% nationwide. Today, the rate is 3.66%. Between now and the Fed’s next policy-making meeting September 13, though, mortgage rates are subject to change. If today’s mortgage rates fit your budget, consider locking in.