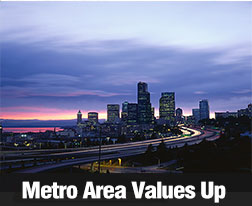 19 of 20 metro areas showed higher home prices in Q 4 2012 with the New York metro area showing a decrease in home prices; this could be due in part to the impact of Hurricane Sandy.

Home prices in the Phoenix Metro area improved by 23 percent compared to Q4 2011 for the highest year-to-year increase of all metro areas in 2012.

The 10 and 20 city indices and national home price composite improved as well.

The 10 and 20-city composites have gained approximately 8 to 9 percent since reaching their most recent lows in March of 2012; current readings indicate that home values have returned to autumn 2003 levels, but remain about 30 percent lower than they were at their peaks in June and July 2006.

On a month-to-month basis, both the 10-and 20- city composite Indices returned to positive readings with each rising by 0.2 percent, which recovered last month’s losses of 0.2 and 0.1 percent respectively.

The national home price composite is determined from information taken from the 9 geographic divisions established by the U.S. Census Bureau.

While some areas are still facing challenges, some cities and metro areas where home values declined the most are rebounding nicely.

All in all, it is quite apparent that the broad U.S. housing markets are recovering.

This site uses Akismet to reduce spam. Learn how your comment data is processed.